Note: Google has disabled 3+ multi-monitor support while they finish the UI. See Google Chromium OS Issue 467193 for updates on Google’s status for enabling this support. 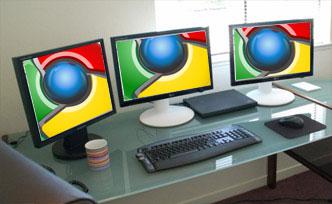 For the moment, there are still lots of limitations including mice cursors not working and EDIDs getting lost. But with time and attention, this could become one more area where Chrome OS closes the productivity gap with other systems.

So what’s new? You may have seen the addition of ozone and fre(c)on (we have seen this called out as “+frecon” or “freon”) in the most recent ChromeOS builds. What does this mean? According to Google’s own François Beaufort.

With this switch, Google has also been able to take advantage of the DisplayLink USB 2.0 DRM/KMS driver that’s been in the Linux kernel for several years and begin work on some much needed configuration support. While still not complete enough for normal use, this work may eventually translate into DisplayLink functionality for Chrome OS in the near future (there is no official announced release date yet).

Display adapters which will work in this scenario are USB 2.0 based and feature the DisplayLink DL-1×5 family of chips since they are backed by open source drivers. 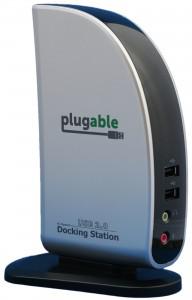 Our devices which fall into this category include our:

We have done some preliminary testing using the ASUS Chromebox CN60. To be able to get newest build and fre(c)on/ozone bits, we had to switch over to the dev channel. We ended up with the following build: 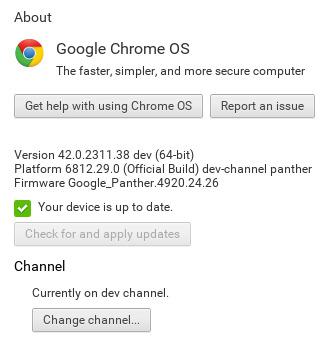 The CN60 already has a built in DisplayPort and HDMI video port, but we wanted to push the envelope and add yet another monitor via our UGA-165. So, what was the result?

At first we just used two monitors overall, one plugged into the native DP- or HDMI port and the additional one into the USB grpahics adapter. Boom, we had instantly gained an extended monitor and gazed at all the pretty pixels.

Unfortunately we also came across our first few bugs. The mouse cursor was not visible on the UGA-165 connected extended display (same result for the USB-VGA-165 and UGA-2K-A). I could still move around and bring up menus on the extended display. I attempted to turn off mouse acceleration via the xset m command to fix this problem (a trick often mentioned by the Chrome OS and Linux community) but CROSH (the equivalent of command prompt for Chrome OS) just did not want to take to my commands, so I gave up. As an alternative means, I enabled “Show large mouse cursor” in Settings, and was able to utilize an over sized mouse cursor on both monitors (IN YOUR FACE CROSH!).

The most lamentable fact was, attaching more than two displays (no matter what the combination, either built-in video port or display adapter) would bring the system to its knees. All we saw was black screens and a complete system lock up. If the third display was quickly disconnected, the system recovered however. The ultimate fix was to remove the third monitor and to reboot the system which brought everything back to life.

We are excited to see this feature enabled in the dev channel and are anticipating the official arrival of ozone/fre(c)on in the stable channel once all the bugs have been ironed out.

With this support beginning to roll out to more Chromebooks, it’d be great if you could take the time to report them to Google to help improve support for this scenario.

And your experiences help other Chromebook users trying the same things. Feel free to comment below. Thanks!