The best thing about interacting with customers–beyond the joy that comes from helping people solve problems–is learning the ways they’re using our products, especially when they come up with purposes beyond any we ever envisioned. Here are two examples of novel uses of the Plugable USB2-SWITCH2 USB 2.0 switch for one-button swapping of a USB device or hub.

Computer A Might Not Be A Computer
You might notice in the introduction that the USB2-SWITCH2’s title was shortened from its full name of “USB 2.0 switch for one-button swapping of a USB device or hub between two computers.” And that’s where the first story begins.

A customer wrote us with the following situation. He had a Cannon printer/scanner/copier that he had WiFi-enabled by connecting it to his Apple AirPort Extreme base station via a USB cable. Now he could print to the Cannon device from any computer on his WiFi network.

But if he wanted to scan with the Cannon, he needed to establish a direct USB connection between the Cannon and a computer. This meant unplugging the Cannon from the AirPort base station and connecting it to a computer–a cumbersome, inefficient process. 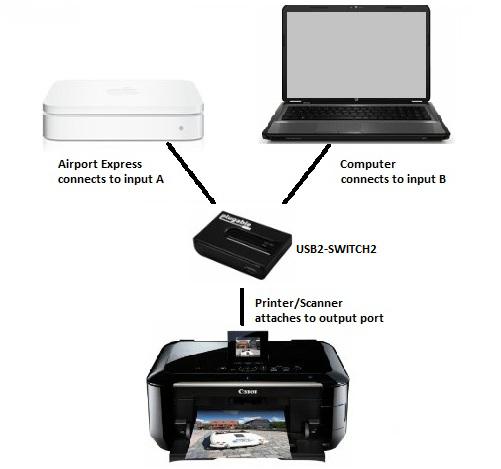 Now when he needed to print, he could make sure that the switch gave the AirPort control over the USB connection to the Cannon. Any computer or tablet on the WiFi network capable of printing to the Cannon could send data there via the AirPort.

But when he needed to scan something, he could swap access to the computer plugged into the switch’s input port B to establish the necessary direct USB connection between that computer and the Cannon device. He didn’t even need to leave a computer permanently attached to port B. He could just leave the USB cable in port B and attach it to a computer as needed.

When we first released the switch, we wrote a blog post about how you could attach a hub to the switch’s output port and then provide access between two computers to multiple USB devices. We never considered that one of the devices on the input ports could be something like an AirPort that allowed multicomputer access to whatever device or hub was attached to the switch.

We salute the ingenuity of our engineering-focused customer who opened our eyes to this possibility and thank him for sharing his story.

Turning Off the USB Connection
Our second switch-master had a Bose speaker system that could be used with multiple types of playback devices.

His PC needed to connect to the Bose speakers via a USB cable.

A non-USB device could be connected to the speakers from its heaphone jack to a 3.5 millimeter input jack in the speakers via a male-to-male stereo cable.

The problem was that when the PC was plugged in to the speakers via USB, the customer had to unplug the stereo cable . The customer wanted to end this annoyance of continually fiddling with which cable was connected.  Plus, if you’ve ever had a cable that you use with a particular device, you  know how easy it is to lose that cable if you can’t just leave it attached where you use it.

It might seem odd that the USB2-SWITCH2 could have any benefit in this scenario. But here’s what our customer did. 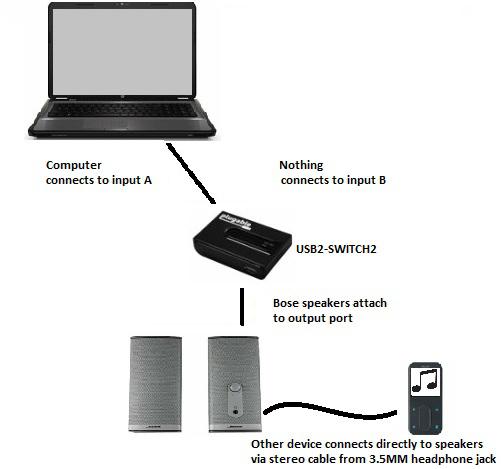 Now he could leave the USB and stereo cables connected plugged in simultaneously.

To play sound from his PC, all he had to do was use the computer on input port A. To playback sound over the stereo cable, he could swap the switch to input port B. With no device attached to input B, the Bose speakers acted as if there was no USB cable plugged in at all. Therefore, the speakers played back the sound being transmitted through the stereo cable instead.

This customer transformed our switch for device sharing into an on-off switch for the Bose’s USB connection simply by recognizing that sometimes nothing is the best thing to plug into the switch’s port B. Well done, sir.< What’s Your Story?
The switch is one of the simplest devices Plugable manufactures, so to know that our customers are finding complicated new uses for it makes us wonder what’s being done with some of our more complex offerings. Feel free to share your usage stories below. We love to hear from you, and you might inspire the next great new idea for getting the most out of Plugable products.