When we heard ASUS had released the first commercially available USB 3.1 equipped motherboard we rushed to get our hands on one. We picked up the ASUS Z97-PRO(Wi-Fi ac)/USB 3.1 and assembled our new USB testing workstation. Since Intel is not yet ready with their USB 3.1 controller, ASUS added an ASMedia ASM1142 USB 3.1 XHCI 1.1 controller with two teal colored USB 3.1 type A connectors. 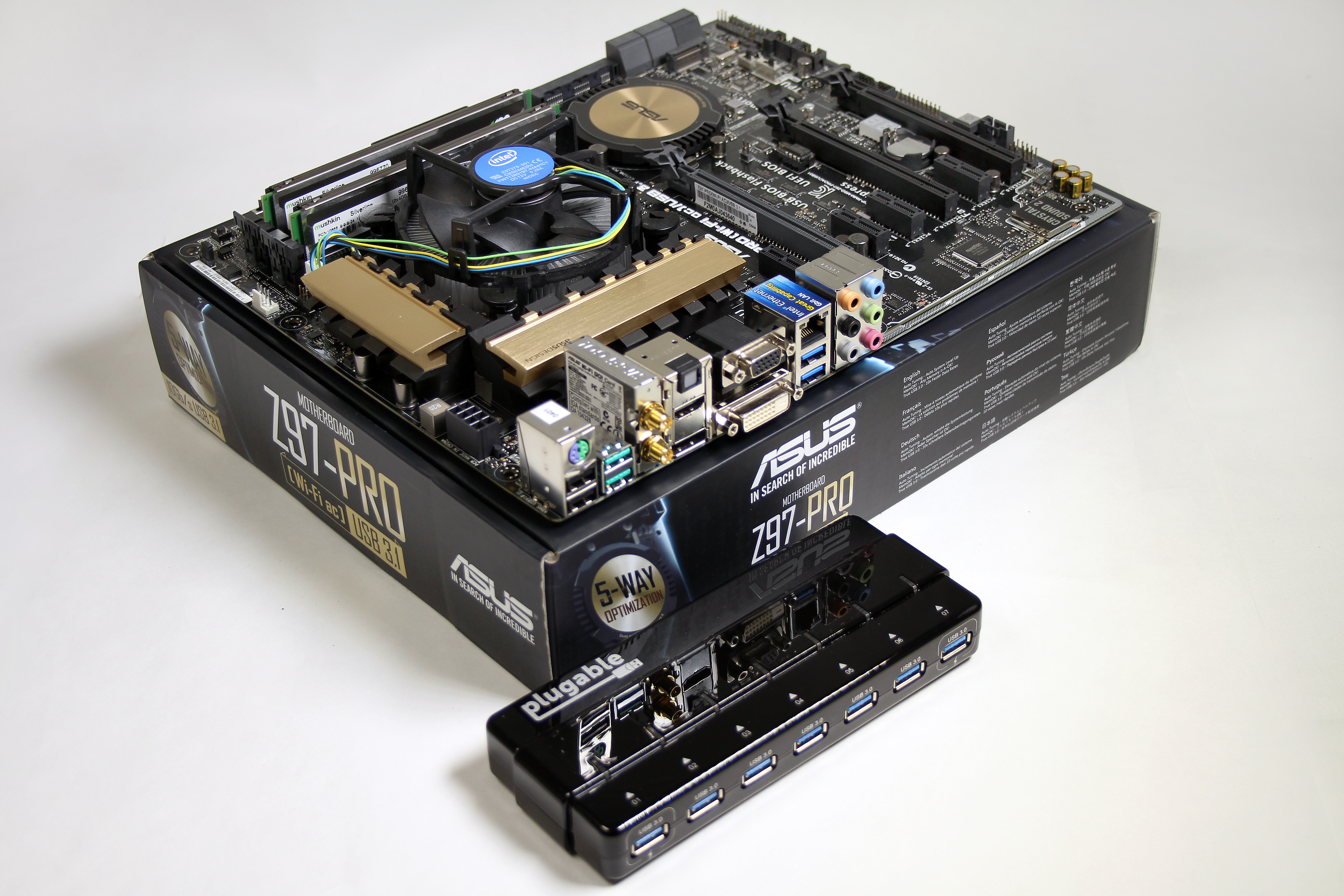 As most of our products are USB based, we wanted to get some early testing results to be prepared for any issues that might arise with this new USB 3.1 controller. We installed a fresh copy of Windows 8.1 with all of the latest updates and found that the built-in Microsoft XHCI “0110” driver (version 6.3.9600.17393 from 10/6/2014) for the ASMedia controller only appeared to be USB 3.0 capable according to the device description. 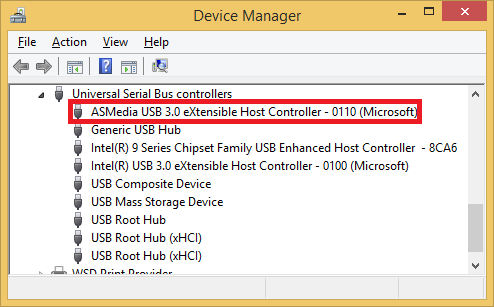 Normally we do not recommend replacing the built-in Windows 8/8.1 Microsoft USB driver stack with 3rd party drivers but in this scenario to achieve full USB 3.1 functionality we tracked down the latest 3rd party driver installation utility from ASMedia (version 1.16.23.0 from 12/24/2014) provided by ASUS in their motherboard support downloads section and installed it. Now the controller was being recognized as an XHCI 1.1 controller capable of USB 3.1! 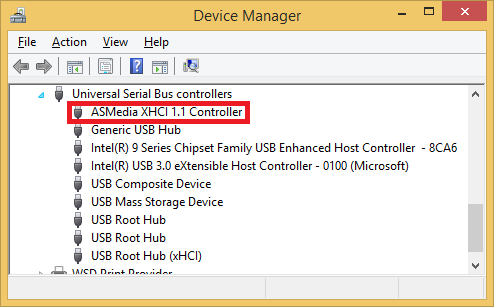 Unfortunately we experienced major issues almost immediately. Upon connecting our USB3-HUB7-81X (VIA VL812 B2 based) 7-port hub, the system instantaneously crashed with a “SYSTEM_SERVICE_EXCEPTION (asmtxhci.sys)” blue screen of death. This was not a good sign as the driver in question that caused the crash was the ASMedia driver (asmtxhci.sys) we had just installed. 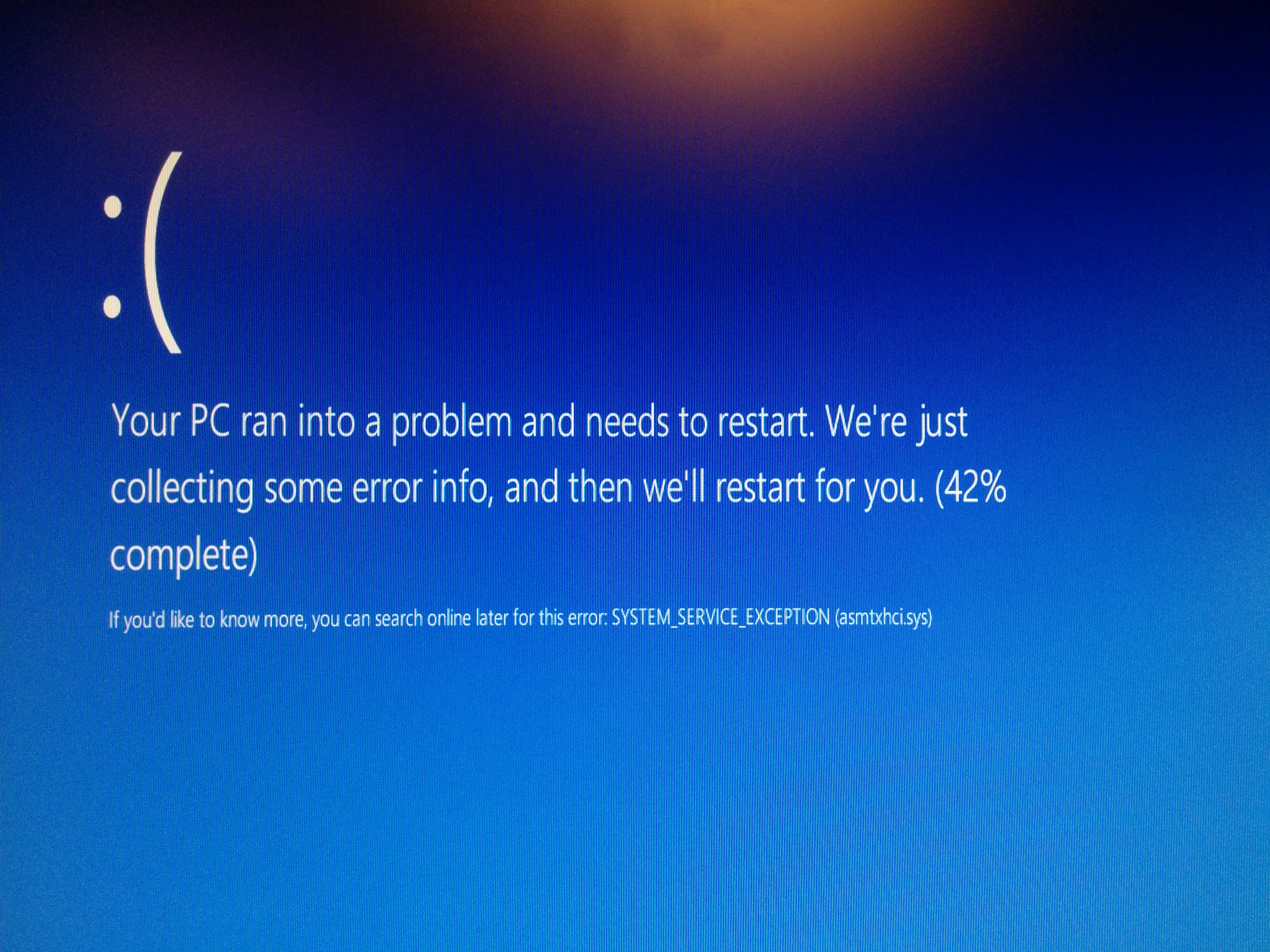 After several reboots and experimentation, we found the crashes to vary widely in frequency. Sometimes the crash would occur with a simple USB 3.0 flash drive, other times with our 7-port hub and all 7 ports occupied with USB graphics adapters. When connecting these same devices to the on-board Intel 9 Series USB 3.0 controller there were no issues. We decided to remove the ASMedia 1.16.23.0 drivers and roll back to the built-in Microsoft “0110” drivers to see what would happen. We found that the controller became as stable as the Intel controller but with the tradeoff of losing USB 3.1 functionality for future USB 3.1 devices. This was not a compromise we were willing to make.

We did some digging and found that the “asmtxhci.inf” driver file from the ASMedia driver installer not only worked for the new ASM1142 USB 3.1 controller, but it appeared to be a unified driver covering all ASMedia USB host controllers. This gave us an idea. We installed an older ASMedia ASM1042 USB 3.0 PCI-E controller card in our USB test workstation and installed the ASMedia 1.16.23.0 drivers once again. Both 3.1 and 3.0 ASMedia controllers were now running the same driver on the same workstation. 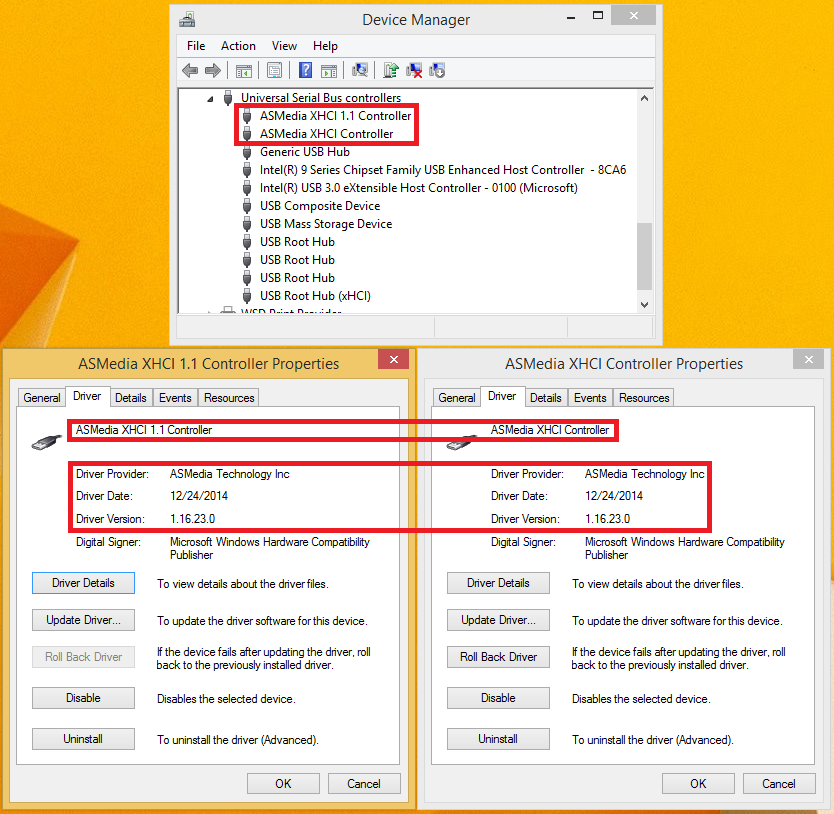 We found that the instability we encountered on the on-board ASM1142 3.1 controller also happened on our add-on PCI-E ASM1042 3.0 controller. Knowing that the instability was definitely driver and not hardware related, we looked at the “asmtxhci.inf” driver file for the older (stable) ASMedia drivers that we have been recommending to our customers for their ASMedia USB 3.0 controllers (version 1.16.18.1 from 4/10/2014, WHQL certified) and found that it was also compatible with our new 3.1 controller despite being the oldest of the three compatible drivers. 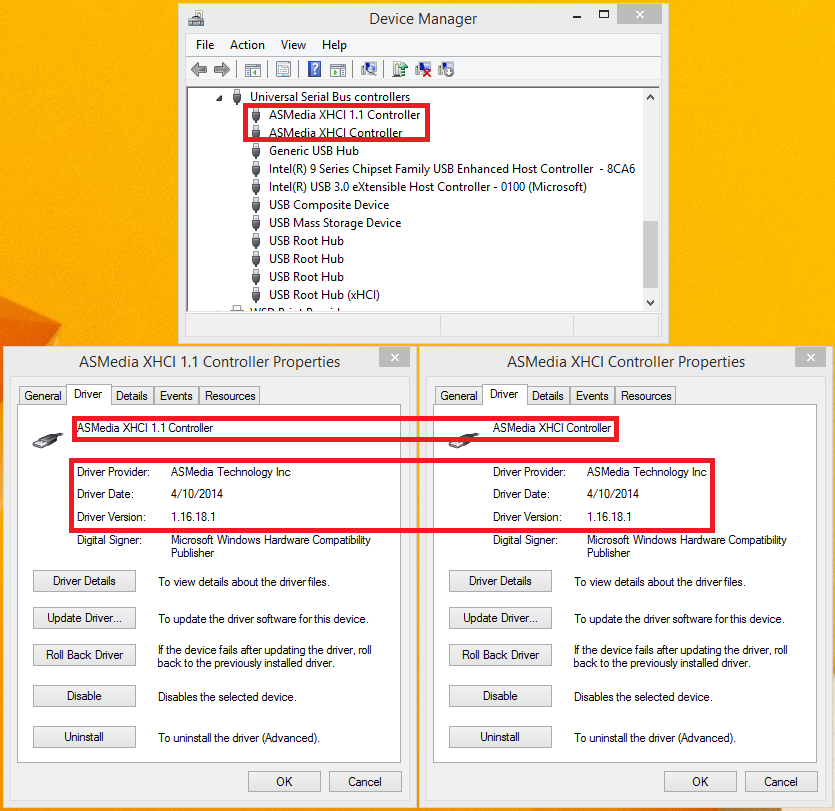 At the moment Plugable is still testing the ASMedia ASM1142 controller but the early results are looking great after finding a stable driver. We’ve currently got 6 of our USB3-HUB7-81X 7-port USB 3.0 hubs and 36 of our UGA-3000 USB 3.0 DisplayLink graphics adapters attached with no signs of instability or USB resource limits. (Please note that Windows and DisplayLink does have limits to how many monitors can be attached. Our demonstration here is unlikely to initialize all 36 adapters with monitors attached successfully. Realistically we have been able to get up to 14 with success in the past.) 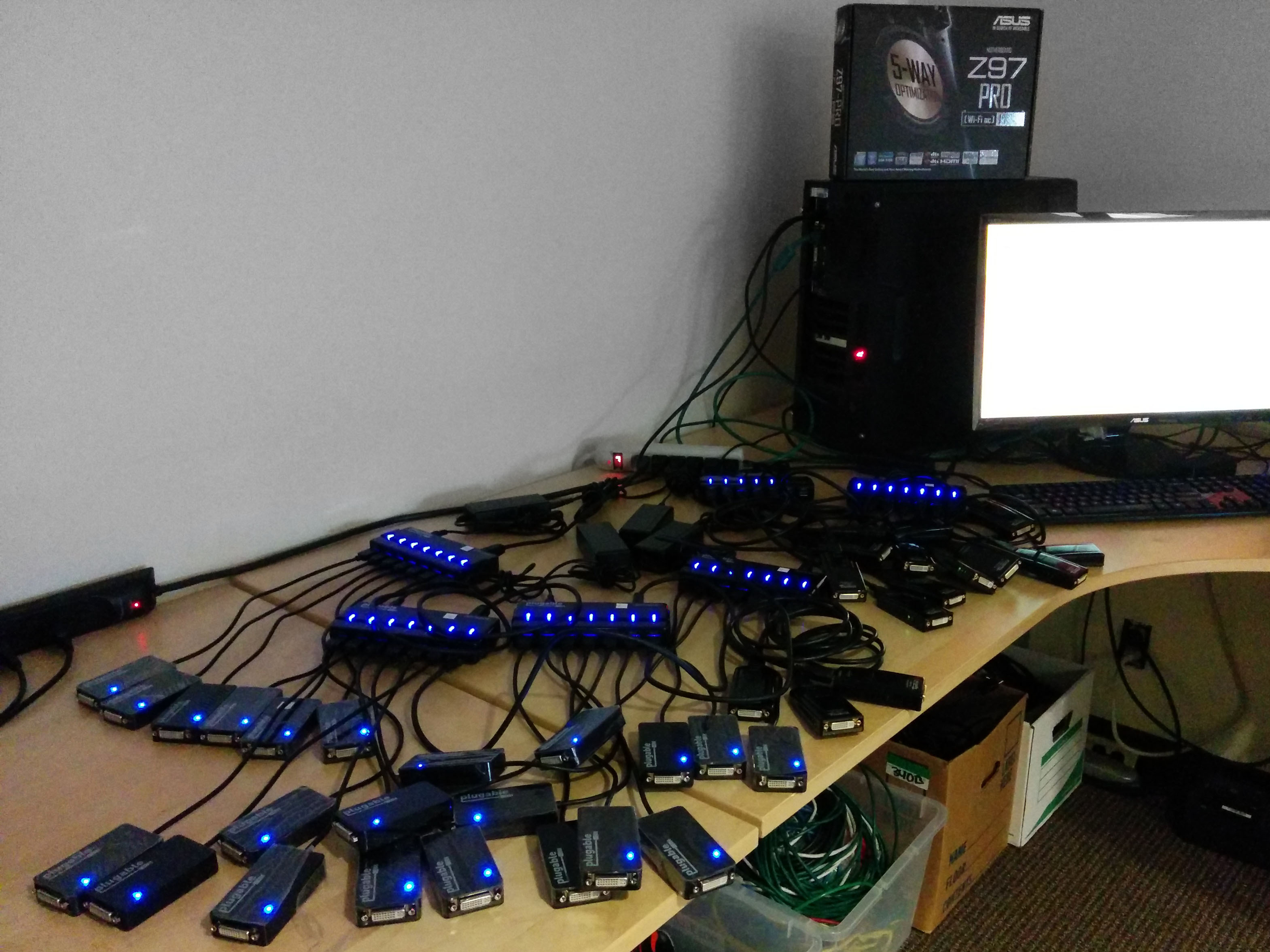 For the time being, we strongly recommend users do not install the latest 1.16.23.0 driver version from ASMedia but rather install the older stable 1.16.18.1 drivers (or use the built-in Microsoft “0110” drivers if 3.1 operation is not required). Unfortunately as we’re still waiting for some native USB 3.1 devices to test, we cannot comment on actual USB 3.1 device functionality on any of the aforementioned driver versions.

Due to the difficulty in finding and downloading the stable ASMedia driver version 1.16.18.1 we have provided it below for your convenience. Feel free to also comment below if problems remain but Plugable cannot take any responsibility for any issues these drivers may cause to your computer.