The Plugable Bluetooth adapter, from an electronics standpoint, is a relatively simple device. It’s basically a radio that forwards information back and forth between your computer and your Bluetooth peripheral devices. All the magic and complexity in Bluetooth is in the software—the drivers for the adapter, layers of Bluetooth and USB support software in the computer, and the firmware on your Bluetooth device. If all of these are not working together properly, Bluetooth won’t function. To track down and resolve Bluetooth software issues, you need a powerful tool that can gather the information you need and make it available.

At Plugable, we’ve developed that tool. It’s called PlugDebug. In this knowledge base article, we’ll go over how to use PlugDebug to identify potential software and driver issues affecting the Plugable USB-BT4LE Bluetooth adapter, and give steps for solving those issues. These are the "secrets" we use for resolving hundreds of user issues every year.

The troubleshooting techniques described here are meant for advanced computer users and are completely optional. Basic troubleshooting steps are located here. We are always happy to help with any questions or issues! Just contact as at support@plugable.com.

An Overivew of Bluetooth Operation

As mentioned above, the Bluetooth adapter itself is pretty simple. It takes packets of data from your computer, encodes them into a radio signal, and sends them to your peripheral device. It receives radio packets from the peripheral device, decodes them into data packets, and sends them to the computer. This process can suffer in two ways: radio problems that block or corrupt the radio signal and problems with the hardware of the adapter itself. Adapter hardware problems will usually show up when the adapter fails to work at all.

Radio signal problems tend to show us as reduced range, frequent disconnections, and lag. In our experience, most radio problems are caused by radio noise coming from components in the host computer, especially poorly-shielded USB 3.0 ports and unshielded components in desktop computers. Radio problems can also be caused by objects between the adapter and the receiver blocking and absorbing the signal. Having a large number of strong Wi-Fi signals in the area can also cause radio problems, since Wi-Fi and Bluetooth use the same radio frequencies, but Wi-Fi is much more powerful.

When you plug your adapter into a USB port, the computer queries it for information about what kind of device it is. It then searches for a driver for your device. A driver tells Windows how to communicate with a hardware device and how to interpret the information it sends and receives. Using a wrong or corrupted driver means that Windows is not able to communicate with a device properly. Having drivers present for more than one Bluetooth device also causes problems because Windows does not know which one to communicate to.

Windows creates the data packets to send to the Bluetooth adapter in its Bluetooth stack. This is software arranged in layers that processes and prepares Bluetooth data for particular purposes. It also receive data from peripheral devices connected through the Bluetooth adapter and shapes into data that can be understood by other programs in Windows. The stack has separate modules, called profiles, that standardize how Windows communicates with particular Bluetooth device types, such as A2DP (stereo audio), HID (human interface devices like keyboards and mice), HSP/HFP (headsets and hands-free devices), and many more.

Different Windows versions come with different profiles. For example, while Windows 8 through 10 support Bluetooth audio, in Windows 7, Windows audio profiles and drivers have to be installed with third-party software, such as the driver packages on the Plugable website or the CD that comes with the adapter. Missing, corrupted, or incorrect profile versions will cause pairing and connection problems. Often a driver error for the peripheral will be reported in this case.

Windows establishes a connection with a Bluetooth peripheral through a pairing process. Typically, Windows acts as a host and the peripheral is put into pairing mode, where it advertises its presence to any nearby Bluetooth devices. Windows sees the peripheral and establishes low-level communication where it finds out the devices name and what kind of device it is. It displays the device information in the settings window that appears when you want to add a Bluetooth device.

When you tell Windows to pair and connect to a Bluetooth peripheral, Windows establishes a connection and asks the device what profiles it uses and what kind of security it supports. If Windows has those profiles available it uses them as guidelines on communicating with the device. It goes through the security protocol required by the device, sets up the connection, and is ready to communicate with it according to the purpose of that device.

PlugDebug is a program that runs several information gathering utilities on your computer and saves the results in a single compressed zip file on the desktop. The information is strictly troubleshooting related, with no personal information or files gathered. We designed it to be used with all of our products, so some files it gathers don’t help in troubleshooting Bluetooth problems. However, the ones that are useful can often point straight to the problem and make it easy to solve. The files we use for Bluetooth troubleshooting are in two possible formats: either comma-separated values (CSV) that can be be opened in most spreadsheet programs or as plain text files. 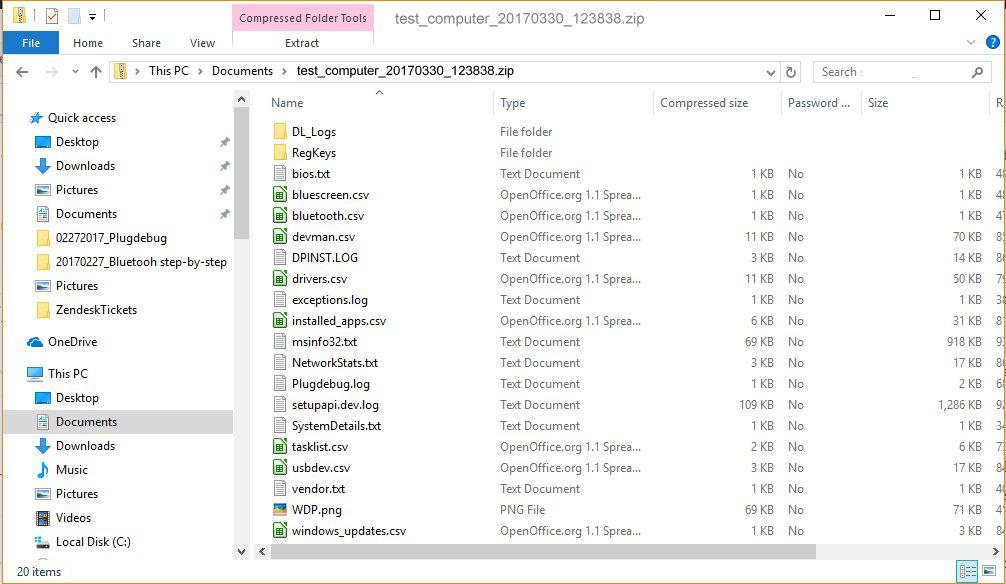 The following are the files most useful for Bluetooth troubleshooting, listed in order of how frequently they are used:

Things to Consider Before Using PlugDebug

PlugDebug is used for advanced troubleshooting when it is clear that devices won’t connect and Bluetooth is not working with the Plugable adapter. Please note that using the self-help instructions on this page is optional. You can always contact us for help.

Is Your Computer on a Domain?

If your computer is a work computer, it is likely to be on a domain, which means its settings are centrally controlled by your company’s IT staff via Microsoft’s Active Directory. Many companies create rules for computers (called "Group Policy") that hinder the operation of the Plugable Bluetooth adapter by preventing even users with administrator-level privileges from installing software or making setting changes that are necessary for using the adapter.

You can check whether you are on a domain by examining PlugDebug’s NetworkStat.txt file. Open the file and look at the Primary DNS Suffix field near the top. If there is a name there (often looking like your company’s Internet address), your computer is on a domain, and we recommend consulting with your company’s IT staff before proceeding to see if there are any group policies that would affect the Bluetooth adapter’s operation or software installation. Group policies can be overridden by using the default Administrator account from the domain controller or enabling and using the local default Administrator account for the workstation.

Running PlugDebug and Reading the Files

Open the file named installed_apps.csv. This file contains information on all the programs installed on your computer, including Bluetooth software. Here again you want to search for “blue” in the installed apps. If you have installed the software from the Plugable CD or from our website, you will see an entry here for WIDCOMM Bluetooth Software. Any other entries with the word “Bluetooth” in them are probably software for adapters other than the Plugable adapter and will cause problems. “BlueSoleil” is a Bluetooth software program produced by IVT Corporation that will need to be removed if it is present. If you aren’t sure if a program that contains “blue” is a Bluetooth program, just Google its name to see what it does. The screenshots below show a WIDCOMM Bluetooth installation that should work in Windows 10 and an Intel Bluetooth software installation that is likely to cause problems.

If you found any of the red flags described above in your PlugDebug results, click on the appropriate problem in the list below to find instructions for resolving them.

Problem: A Built-in Adapter Was Found

To get the built-in adapter working, please try the following to uninstall the Plugable driver and software:

After doing this, check for a Bluetooth icon in the system tray at the lower-right near the clock (click the upward pointing arrow if needed). If you see it, try connecting your Bluetooth devices. If you don’t see it, or it doesn’t work, we recommend trying the following procedure to force Windows to reinstall the drivers for the built-in adapter.

Windows Update should install the current driver for your built-in adapter. Check for the Bluetooth icon in the system tray and try using Bluetooth again. If an icon isn’t present or it doesn’t work, check your computer maker’s support website for drivers for your built-in adapter and install them if found. If drivers can’t be found or they don’t work, please contact us at support@plugable.com, or try the following to use the Plugable adapter:

Procedure to Disable Built-in Adapter and Use Plugable Adapter

If possible, the best solution is to disable the built-in adapter in the UEFI/BIOS settings for the computer. If this is not possible, try the following:

If this doesn’t work, please contact us at support@plugable.com. There is likely a deeper problem that must be addressed.

This procedure is recommended only for advanced users who are familiar with the command line in Windows and only after the methods above have failed. If you have any doubts at all, please don’t hesitate to contact us, and we can determine if this will help and guide you through it.

Please note that this procedure is for advanced users only. Deleting the wrong packages can cause serious problems for your computer.

We hope this page has been useful to you! This is the first time we’ve shared troubleshooting information this advanced and would love to hear how it worked for you and any changes you would recommend. If you have any questions, comments, or suggestions, please contact us. Thanks!